The Once and Future Nerd: Season 2 out now

The second season of the audiodrama podcast The Once and Future Nerd premiered Sunday, March 12th, new episodes will be released every few weeks (depending on our post schedule). I voice a few different characters, along with many talented actors.  All Book 1 episodes are now available on iTunes and at onceandfuturenerd.com. Subscribe on iTunes, Stitcher, or wherever you get your podcasts.

The Singing Sister from The Once and Future Nerd available now as a single! 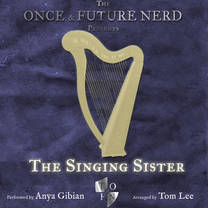 Over a year ago, I asked Christian Madera if one of my characters on The Once and Future Nerd could sing a song, and he said, "Only if you write it." So I did! Christian and Zach wrote the lyrics (based on a traditional English murder ballad), and I composed the melody.  The resulting song and episode, "The Singing Sister," was well received and we got many requests for just the song, so Tom Lee arranged it, a bunch of talented musicians played it, I sang it, and it's now available as a single for download!

Enjoy! Here it is on Bandcamp